A downloadable game for Windows and Linux

Made by Dylan Wijaya (@dylan.wijaya on instagram) and Fancybread (@fancybreadd on twitter) for the Scream Solstice game jam in 10 days. This is my 2nd ever game jam and for the artist @fancybreadd, it is his first :D.

Thank you so much SCREAM catalogue and Caveware Digital for hosting this jam :D

(WARNING: JUMPSCARES AND FLASHING IMAGES) Imagine this, you are a little girl, invited to a sleepover  with 3 other girls. It sounds fun, doesn't it? Well your innocent self is going to put up with hell when someone dares you to play "Bloody Mary". At first, you don't believe that ghosts are real. Well, things are going to get very real for you and scary....

Get prepared to try to escape the house with Bloody Mary roaming around it. You are free to do anything you want with your friends: either protect them or leave them to get possessed. Your decisions can lead to any of the 3 endings. Have Fun and you better start believing in ghosts or else......

2. Unzip it and open the "Scream Jam" application file

the story is good i like the idea of girls that don't know the fuck they are doing it's just the game is really hard to control i can't even pick up the keys some times but good game anyway :)

Since Levont took most of the words out of my mouth, I'll add a few things he hadn't said.

Ghosts run as fast as your dash ability when there's a direct line of sight, and you can be killed while you're opening a door. This means you're practically already dead as soon as the ghost starts dashing, which is rather unfair.

Since the element above basically forces the gameplay into trial-and-error, the intro being unskippable is rather annoying and is probably my main problem with the game. Also, it might just be me, but the dialog box occasionally blinks while it's still typing.

I'd also like to suggest you to ditch the door-opening fade transition entirely, since objects like keys are already loaded and (in the version I played) visible through walls from the corridors, so I assume the rooms are on the same map and doesn't actually need a loading sequence.

This game has a lot of potential, and I like the style of it a lot, but the execution feels rather rushed. I'm aware that it was made in a game jam, but since you're still updating the game, I thought I'd add a comment for the future.

Keep up the good work!

While the game idea is interesting and the story of Bloody Mary is a good one to work with, I feel like a bit more polish is needed.

One of the things I noticed is that when you press q to run, it would use up the bar even if you are out of danger. It would suit the game a bit more if it was more of a toggle ability that refills when not in use instead of a one time press to use.

Another thing I noticed is the fact that Bloody Mary herself keeps respawning at the edge of the screen. It'll help her creep factor more if she despawns when the player outruns her off the screen and respawns in another area.

Last thing I noticed is you used shapes and loud noises for your death/jumpscare. I recommend tailoring the death/jumpscare to each entity type. (I.e Ghosts gets a possession death while Bloody Mary gets the screen slash and shake death with accompanying sounds.)

Overall a decent foundation for the game to improve on.

Here's my channel for other games I have played. http://www.youtube.com/c/Levont

First of all, thank you so much for making a video about our game. This is the first time that this happened to us, we were very excited :D! I have to admit that I was very focused on submitting a finished game that I didn't spend that much time playing the whole thing. That annoying jumpscare sound was my fault sorry xD, it was actually my first time programming triggerable audios. We watched your video and the reason that the enemies sometime lag on rhe side of the screen is because those ghosts are supposed to patrol around the house very fast when it is out of sight and slows down when the player sees it and thx, I will fix that by spawning them somewhere else when the player escapes from them. However, the ghosts that appear in the rooms are randomly spawned at a 25% chance. Some players have also complained that they cannot skip the intro, this is what I hate most about the game and I will add a retry button at every jumpscare after the jam. Many players have also complained about the jumpscare not being scary enough and heck, I expected my dad to at least flinch but instead he laughed at it xD. I agree with you about it being unsual because horror games are suposed to be dark so I make it less colourful by adding a camera effect where there is a light circle around the player and darkness surrounding it. Once again, you do not know how much we appreciate this upload. You motivate us to make better games and because of this, I thank you very very much! :D

No problem. The value of the game often improves with those extra hours put into those tiny details. As the saying goes, “A delayed game is eventually good, a bad game is bad forever.”

The golden key might be stuck in the [spoiler alert]

Thanks for pointing that out! I have fixed it and I also made it so that you can't see the keys from another room. I can't believe that you played my game, I have watched some of your videos and they are very good.

I understand that you might get lots of requests from game developers who want their game to be featured on your channel. My game might not be good enough but is there any chance that you record your gameplay and post it on your channel? I might be asking for too much and I'm sorry. - Thank you

Heyo, I didn't have anything interesting to say about A Fun Sleepover (at least as far as I got), so I didn't make a video. 2D rpg(esque) games are very rare on the channel anwyays :) If you're excited about having a YouTuber make videos of it, I'd suggest looking for a small one that commonly plays 2D RPGs. Letsplayindex might help.

Thanks for your tip! But I made the most stupid mistake ever xD, I forgot to enable all the enemies. I have updated the game and they are enabled now so the game is more intense. If you like, download and play it again. I hope I don't sound too pressuring. Thanks. 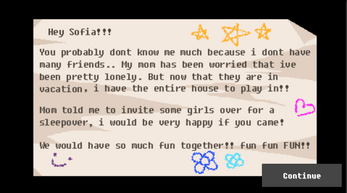 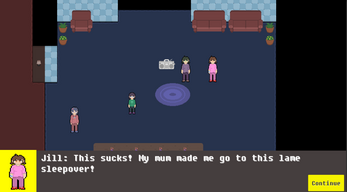 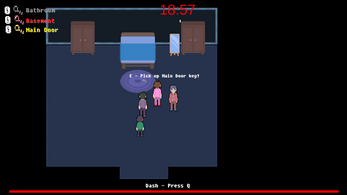 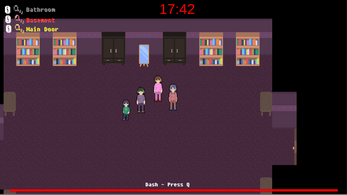